Jovana Preković, a member of the Military Academy’s Sports Unit, was declared the most successful athlete in the Ministry of Defence and the Armed Forces in 2021. Last year, Jovana Preković won two gold medals at the Karate Premier League competitions, in Istanbul and Lisbon, and she confirmed her supremacy at the European Senior Karate Championship in Poreč.

Thanks to her achievements, Jovana Preković became a member of the Serbian Olympic team for the Olympic Games in Tokyo, where she won a gold medal at the largest sporting event on the planet.

Only three months later, she defended her 2018 champion title in the - 61 kg category, at the Senior World Championship in Dubai. In addition to all her work, preparations and competitions, Jovana Preković is actively involved in the sports section, working with Military Academy cadets.

In 2021, the SAF Military Police team won a gold medal in the "Guardian of Order" discipline at the International Army Games. The International Army Games organized by the Russian Armed Forces as a prestigious military skills competition, take place every year with contestants from more than 50 countries and four continents competing in over 30 demanding military disciplines. After four days of fierce shooting and obstacle course competitions, the SAF Military Police team triumphed, defeating colleagues from the Russian Federation, Kazakhstan, Iran, Cyprus and Qatar.

In addition to this year’s laureates, athletes who achieved exceptional results over the past year received awards for contribution to building the reputation of the Ministry of Defence and the Serbian Armed Forces in the world through outstanding sports achievements. Among them are members of the Military Academy’s Sports Unit, members of the Serbian Olympic team - taekwondo player Tijana Bogdanović, the Tokyo bronze medallist, judoka Aleksandar Kukolj, the World Championship runner-up, judoka Anja Obradović, the World Championship bronze medallist and Jasmina Milovanović, a shooting team member.

Awards were also presented to Captain I Class Nevena Jovanović, the winner of the 34th Belgrade Marathon and the winner of 30 medals at national athletic championships, competitions and races in the Republic of Serbia and Luka Milošević, a Secondary Vocational Military School student and the most successful young athlete in the Ministry of Defence and the Serbian Armed Forces – cadet who holds the national shooting record and has won 30 medals at the official competitions of the Shooting Association of Serbia in 2021. 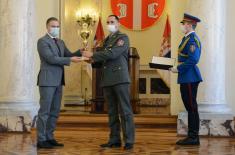 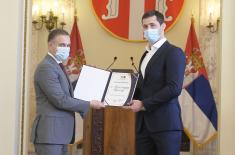 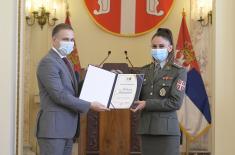 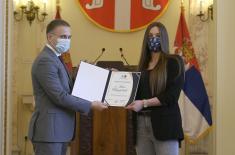 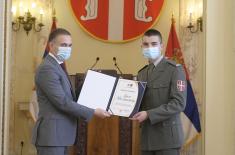 Members of the Serbian Delegation to CISM
Delegates